Enos “Country” Slaughter, along with Johnny “Pepper” Martin, epitomized the hard-nosed style of play that fans loved and opponents feared. Both players were wildly popular in St. Louis; they are therefore presented in these paintings as Cardinals.

While Martin was twelve years older than Slaughter, they did play together for three seasons. Not only were their styles of play similar, so were their batting averages. Martin retired after thirteen seasons (all with St. Louis) with a .298 average; Slaughter finished nineteen seasons with an even .300 mark. 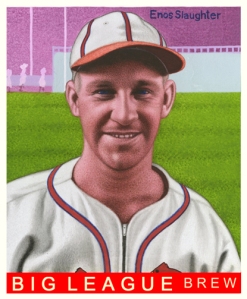