A new batch of art for our R319-Helmar series has just arrived from Sanjay Verma. Sanjay managed to get the pieces to us just prior to leaving for his exhibition in Greece. His exhibition is a joint effort on behalf of both the Indian and Greece governments. I am certain that he will do well and have a great time.

This week I will preview for you this new art. Today I’ll list some of the Brooklyn and Los Angeles Dodger pieces. Both Koufax paintings were commissions and are already spoken for.

I’m a Brooklyn Dodger fan and was glad to add Lefty O’Doul to the mix as a high number. Lefty already appears with the New York Giants as card #11, but his two and a half years with Brooklyn were among his most productive. In 1932, for instance, his .368 batting average led the National League.

It is a special thrill to finally add a Babe Herman card to the series. As a kid I remember reading humorous stories about Babe from a ratty old paperback. He seemed like a genuinely good fellow, more than a bit naive and a truly terrible fielder. Babe could certainly hit, though. He followed up 1929’s batting average of .381 with a .393 mark the following season. Between the two campaigns he had 243 runs batted in. Wow! 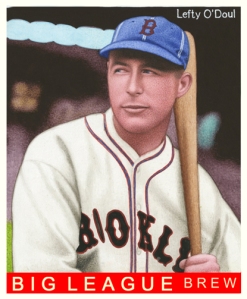 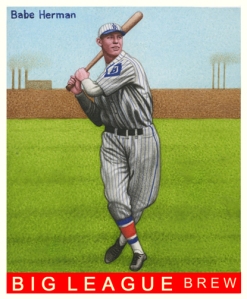