Back in 2005 I published the Famous Athletes Series. These cards were inserted into bags of potato chips. For some reason I originally identified the Jimmy McAleer card as “Hugh McAleer”, probably because I knew someone with a similar name. Personally, I didn’t think that it was all that big of a deal. After all, how many people really remember Jimmy McAlleer? I was wrong. I received quite a few letters and emails informing me that I was incorrect. What I really remember is that there were two or three emails that stated quite plainly that I was a complete idiot. Worse, I was not only an idiot but quite likely evil. So much for a gentlemanly hobby. I bid my time for three years before “correcting” the problem in Series 3. This time there were no complaints.

The best thing about correcting the error was that it made me seriously start to consider making cards that looked like they had been through the wringer…all beat up and yet, somehow, more genuine, more loved. 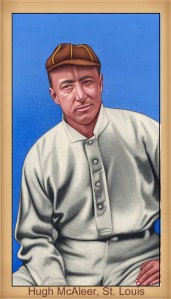 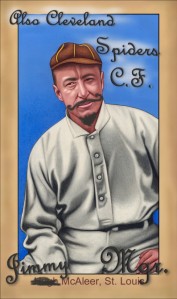